South Dakota v. Wayfair – What Does It Mean for Your Small Business

Do you own an e-commerce store? Sales tax laws may have just changed for you, in a big way. In the past, you only had to collect sales tax if you had a physical presence in a state. But now, because of the decision made by the Supreme Court of the United States (SCOTUS) in South Dakota v. Wayfair (2018), things could change, drastically.

South Dakota v. Wayfair was essentially deciding whether to uphold the precedent set in Quill Corp v. North Dakota (1992). In Quill, SCOTUS ruled that a state could not require a merchant to collect sales tax on shipped items, if the merchant had no physical presence in the state.

That was in 1992 – long before online shopping became the norm. The decision in Quill was intended to apply to mail-order catalogs, but has since been applied to online commerce. Until, South Dakota challenged it.

Since online shopping has become so commonplace, something like this was bound to show up on the Supreme Court’s docket sooner rather than later. SCOTUS heard oral arguments on April 17, 2018.

South Dakota argued that that they’re looking out for brick-and-mortar small businesses. They claimed that out-of-state businesses can sell the same products as in-state businesses effectively for cheaper because they don’t have to charge sales taxes. So, to save money, most people would buy a product online, instead of from a local store.

Of course, it’s pretty obvious why South Dakota cared about this – they’re losing sales tax revenue. Online sales are growing four times faster than traditional retail sales. Technically, states could collect use taxes from the customers who purchase online products, but use taxes are difficult for consumers to comply with and for states to enforce.

On the e-commerce side, it would be difficult for small businesses to accurately collect sales taxes because there are currently over 10,000 (yes, you read that right, 10 thousand) sales tax jurisdictions in the United States. 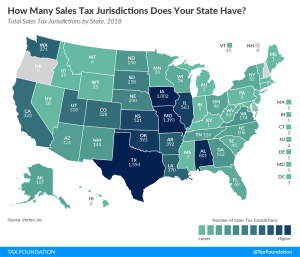 It wouldn’t make sense for a small Etsy store to have to keep track of all those different sales tax rates and laws when they’re only making a few thousand dollars a year.

When SCOTUS heard South Dakota, they had a few questions to consider:

According to Justice Anthony M. Kennedy (in the majority opinion), “Quill puts both local businesses and many interstate businesses with physical presence at a competitive disadvantage relative to remote sellers. Remote sellers can avoid the regulatory burdens of tax collection and can offer de facto lower prices caused by the widespread failure of consumers to pay the tax on their own.”

They essentially overturned Quill and gave states permission to collect sales taxes on online purchases, even if the business does not have a physical presence in the state.

They reached this decision partially because of the minimum nexus threshold set by South Dakota. South Dakota only holds out-of-state online businesses responsible for sales taxes after they have made 200 sales or $100,000 in annual sales. Not every state is that understanding of small online businesses, however. And, unfortunately, SCOTUS did not set a minimum nexus threshold in their decision, leaving it, instead, up to Congress to set the threshold.

What Does This Mean for You?

The decision reached in South Dakota has opened it up for states to begin holding you responsible for sales taxes, even if you don’t have a physical presence in the state. If states decide to do this, you would have to know the sales tax laws of every state and county you ship products to. That’s a huge burden for any online small business. We’ll have to continue watching the states and Congress to see what happens from here.

Are You Emailing Customers? Make Sure to Protect Their Information

11 Reasons You Didn’t Get the Job

Each contributor on the Workful Editorial Team holds an advanced degree in business-related studies and/or communication and has written for other small business publications, including SmallBizDaily, HR.com, and Business.com. The information in this article is based on thorough research and has been edited for accuracy and timeliness by Workful’s Human Resources experts. While this blog is meant to inform and educate small business owners, it is not intended to provide legal, financial, accounting, or tax advice.

See if Workful is right for your business: